Push me
You are here: Home / SEO / Declining Visitor Values

Before the Panda update SEOs could easily focus almost all their energies on late funnel high-intent searches which were easy to monetize without needing to put a ton of effort into brand building or earlier funnel informational searches. This meant that SEOs could focus on phrases like [student credit cards] or [buy earbuds] or [best computer gaming headphones] or [vertical computer mouse] without needing to worry much about anything else. Make a good enough page on those topics, segment demand across options, and profit.

Due to the ability to focus content & efforts on those tiny subset high-intent commercial terms the absolute returns and CPMs from SEO investments were astronomical. Publishers could insert themselves arbitrarily just before the end of the value chain (just like Google AdWords) and extract a toll.

Then Panda happened and sites needed to have stronger brands and/or more full funnel user experience and/or more differentiated content to be able to rank sustainably.

One over-simplified way to think of Panda and related algorithms would be: brand = rank.

Another way to look at it would be to consider the value chain of having many layers or pieces to it & Google wanting to remove as many unneeded or extra pieces from the chain as possible so that they themselves are capturing more of the value chain.

In some cases there may be value in mid-market in-depth reviews, but increasingly the aggregate value offered by many of them is captured inside the search snippets along with reviews directly incorporated into the knowledge graph & aggregate review scores.

The ability to remove the extra layers is driven largely by:

If your competitor is strong and they keep updating in-depth content pieces you can’t set and forget your content and stay competitive. Across time searcher intent changes. Those who change with the markets should eventually have better engagement metrics and keep winning marketshare.

You only have to be better than whatever you are competing against to win.

If you have run out of ideas from your direct competitors in an emerging market you can typically find many more layers of optimization from looking at some of the largest and most successful players inside either the United States or China.

To give an example of how user data can be clean or a messy signal consider size 13 4E New Balance shoes. If you shop for these inside the United States a site like Amazon will have shoe size filters so you can see which shoes from that brand are available in that specific size.

In some smaller emerging markets ecommerce sites largely suck. They might allow you to filter shoes by the color blue but wanting to see the shoes available in your size is a choose your own adventure game as they do not offer those sorts of size filters, so you have to click into the shoe level, find out they do not have your size, and then try again. You do that about 100 times then eventually you get frustrated and buy off eBay or Amazon from someone who ships internationally.

In the first case it is very easy for Google to see the end user flow of users typically making their purchase at one of a few places like Amazon.com, the official New Balance store, or somewhere else like that which is likely to have the end product in stock. That second experience set is much harder to structure because the user signal is much more random with a lot more pogos back to Google.

Over the past couple decades Google has grown much more aggressive at monetizing their search results. A website which sees its rank fall 1 position on mobile devices can see their mobile search traffic cut in half overnight. And desktop search results are also quite ad heavy to where sometimes a user can not see a single full organic result above the fold unless they have a huge monitor.

We tend to look at the present as being somewhat static. It is a part of human nature to think things are as they always were. But the general trend of the slow bleed squeeze is a function of math and time: “The relentless pressure to maintain Google’s growth, he said, had come at a heavy cost to the company’s users. Useful search results were pushed down the page to squeeze in more advertisements, and privacy was sacrificed for online tracking tools to keep tabs on what ads people were seeing.”

Some critics have captured the broad shift in ad labeling practices, but to get a grasp of how big the shift has been look at early Google search results. 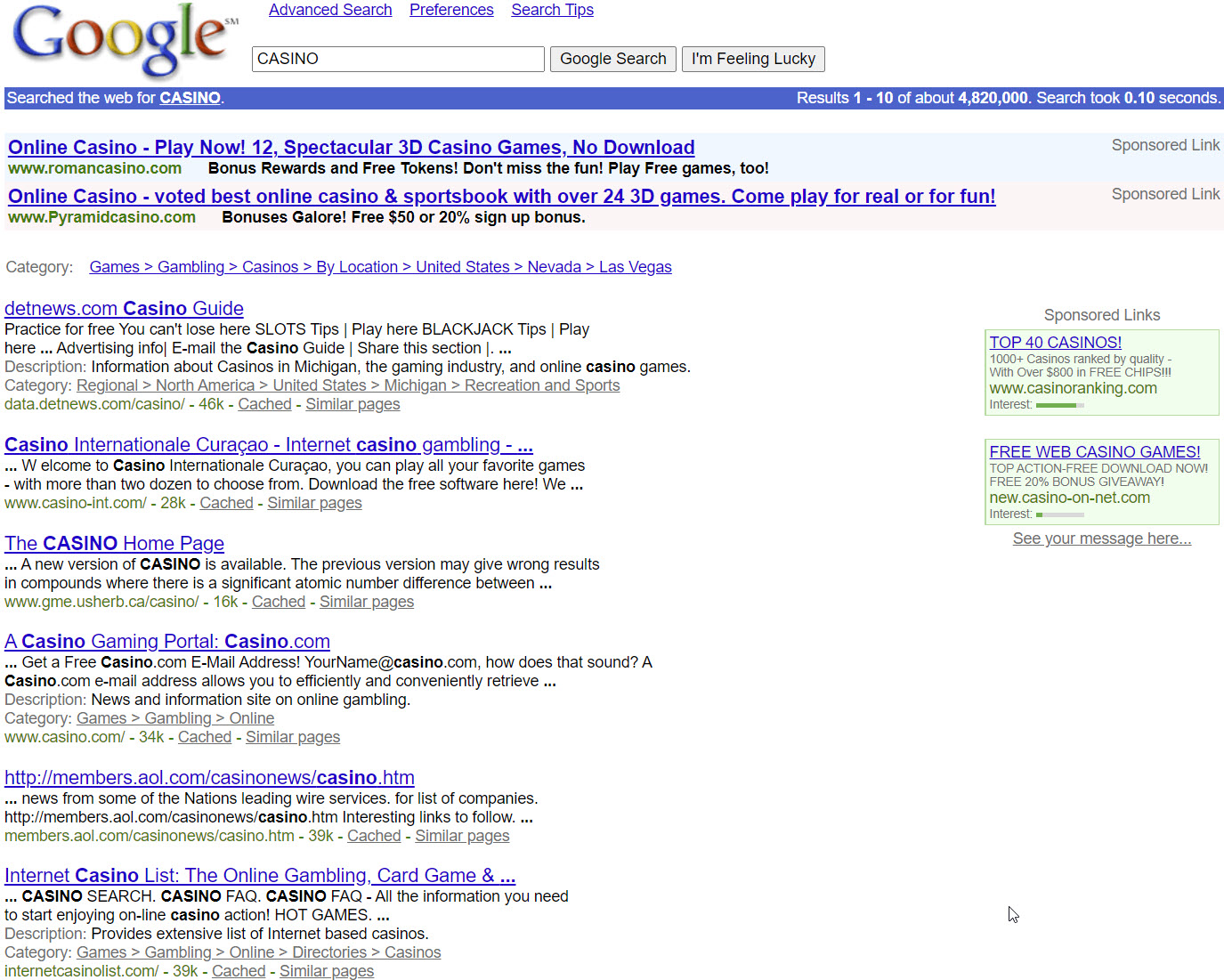 Look at how bright those ad units from 2001 are.

Since then ad labeling has grown less intuitive while ad size has increased dramatically.

As publishers have been crowded out on commercial searches via larger ads & Google’s vertical search properties a greater share of their overall search traffic is lower value visitors including people who have little to no commercial intent, people from emerging markets with lower disposable income and

Since 2010 online display ad rates have fallen about 40%.

Any individual publisher will experience those declines in a series of non-linear step function shifts. Any of the following could happen:

In addition to lowering ad rates for peripheral websites, there are a couple other bonus margin eaters.

Technical overhead leading to programmatic middlemen eating a huge piece of the pie: “From every £1 spent by an advertiser, about half goes to a publisher, roughly 16p to advertising platforms, 11p to other technology companies and 7 per cent to agencies. Adtech companies that took part in the study included Google’s dv360 and Ad Manager, Amazon Advertising and the Rubicon Project.”

Large attention merchants control conversion tracking systems and displace organic distribution for brands by re-routing demand through a layer of ads which allows the central network to claim responsibility for conversions which would have already happened had they not existed.

Internal employees in the marketing department and external internet marketing consultants have an incentive to play along with this game because:

Both eBay and Microsoft published studies which showed how perverse selection effect is.

The selection effect bias is the inverse of customer acquisition cost. The more well known your brand is the more incentive ad networks have to arbitrage it & the more ad networks will try to take credit for any conversion which happens.

When you think about, CAC is “lowest” in the beginning, because you have no customers. You can get the low-hanging fruit cost effectively.

These margin eaters are a big part of the reason so many publishers are trying to desperately shift away from ad-based business models toward subscription revenues.

The commodification of content hits every layer from photography….

Networking is an art and a skill… but if the gold you hold are your images, don’t trade them for the passive networking value.

Simple lesson that is difficult to accept.— Send it. (@johnondotcom) July 4, 2020

…on through to writing

…and every other layer of the editorial chain.

Profiting from content creation at scale is harder than most appreciate.

The idea that a $200 piece of content is particularly cheap comes across as ill-informed as there are many headwinds and many variables. The ability to monetize content depends on a ton of factors including: how commercial is it, how hard is it to monetize, what revshare do you go, how hard is it to rank or get distribution in front of other high intent audience sets?

Some articles will not spread in spite of being high quality. Other articles take significant marketing spend to help them spread. Suddenly that $200 “successful” piece is closer to $500 when one averages in nonperformers that don’t spread & marketing expenses on ones that do. So then they either need the RPM to double or triple from there or the successful article needs to get at least 50,000 visits in order to break even.

A $10 RPM is quite high for many topics unless the ads are quite aggressively integrated into the content. The flip side of that is aggressive ad integration inhibits content spread & can cause algorithmic issues which prevent sustained rankings. Recall that in the most recent algorithm update Credit Karma saw some of their “money” credit card pages slide down the rankings due to aggressive monetization. And that happened to a big site which was purchased for over $7 billion. Smaller sites see greater levels of volatility. And nobody is investing $100,000s trying to break even many years down the road. If they were only trying to break even they’d buy bonds and ignore the concept of actively running a business of any sort.

Suddenly a “cheap” $200 article doesn’t look so cheap. What’s more is said business would also have other costs beyond the writing. They have to pay for project management, editorial review, hosting, ad partnerships & biz dev, etc. etc. etc.