Push me
You are here: Home / SEO / Brands vs Ads

About 7 years ago I wrote about how the search relevancy algorithms were placing heavy weighting on brand-related signals after Vince & Panda on the (half correct!) presumption that this would lead to excessive industry consolidation which in turn would force Google to turn the dials in the other direction.

My thesis was Google would need to increasingly promote some smaller niche sites to make general web search differentiated from other web channels & minimize the market power of vertical leading providers.

The reason my thesis was only half correct (and ultimately led to the absolutely wrong conclusion) is Google has the ability to provide the illusion of diversity while using sort of eye candy displacement efforts to shift an increasing share of searches from organic to paid results.

As long as any market has at least 2 competitors in it Google can create a “me too” offering that they hard code front & center and force the other 2 players (along with other players along the value chain) to bid for marketshare. If competitors are likely to complain about the thinness of the me too offering & it being built upon scraping other websites, Google can buy out a brand like Zagat or a data supplier like ITA Software to undermine criticism until the artificially promoted vertical service has enough usage that it is nearly on par with other players in the ecosystem.

Google need not win every market. They only need to ensure there are at least 2 competing bids left in the marketplace while dialing back SEO exposure. They can then run other services to redirect user flow and force the ad buy. They can insert their own bid as a sort of shill floor bid in their auction. If you bid below that amount they’ll collect the profit through serving the customer directly, if you bid above that they’ll let you buy the customer vs doing a direct booking.

Where this gets more than a bit tricky is if you are a supplier of third party goods & services where you buy in bulk to get preferential pricing for resale. If you buy 100 rooms a night from a particular hotel based on the presumption of prior market performance & certain channels effectively disappear you have to bid above market to sell some portion of the rooms because getting anything for them is better than leaving them unsold.

Dipping a bit back into history here, but after Groupon said no to Google’s acquisition offer Google promptly partnered with players 2 through n to ensure Groupon did not have a lasting competitive advantage. In the fullness of time most those companies died, LivingSocial was acquired by Groupon for nothing & Groupon is today worth less than the amount they raised in VC & IPO funding.

Most large markets will ultimately consolidate down to a couple players (e.g. Booking vs Expedia) while smaller players lack the scale needed to have the economic leverage to pay Google’s increasing rents.

This sort of consolidation was happening even when the search results were mostly organic & relevancy was driven primarily by links. As Google has folded in usage data & increased ad load on the search results it becomes harder for a generically descriptive domain name to build brand-related signals.

It is not only generically descriptive sorts of sites that have faded though. Many brand investments turned out to be money losers after the search result set was displaced by more ads (& many brand-related search result pages also carry ads above the organic results).

Since the Motorola debacle, it was Google’s largest acquisition after the $676 million purchase of ITA Software, which became Google Flights. (Uh, remember that? Does anyone use that instead of Travelocity or one of the many others? Neither do I.)

The reality is brands lose value as the organic result set is displaced. To make the margins work they might desperately outsource just about everything but marketing to a competitor / partner, which will then latter acquire them for a song.

Travelocity had roughly 3,000 people on the payroll globally as recently as a couple of years ago, but the Travelocity workforce has been whittled to around 50 employees in North America with many based in the Dallas area.

The best relevancy algorithm in the world is trumped by preferential placement of inferior results which bypasses the algorithm. If inferior results are hard coded in placements which violate net neutrality for an extended period of time, they can starve other players in the market from the vital user data & revenues needed to reinvest into growth and differentiation.

Value plays see their stocks crash as growth slows or goes in reverse. With the exception of startups frunded by Softbank, growth plays are locked out of receiving further investment rounds as their growth rate slides.

Startups like Hipmunk disappear. Even an Orbitz or Travelocity become bolt on acquisitions.

The viability of TripAdvisor as a stand alone business becomes questioned, leading them to partner with Ctrip.

TripAdvisor has one of the best link profiles of any commercially oriented website outside of perhaps Amazon.com. But ranking #1 doesn’t count for much if that #1 ranking is below the fold.

TripAdvisor shifted their business model to allow direct booking to better monetize mobile web users, but as Google has ate screen real estate and grew Google Travel into a $100 billion business other players have seen their stocks sag.

Google sits at the top of the funnel & all other parts of the value chain are compliments to be commoditized.

Search Metrics mentioned Hotels.com was one of the biggest losers during the recent algorithm updates: “I’m going to keep on this same theme there, and I’m not going to say overall numbers, the biggest loser, but for my loser I’m going to pick Hotels.com, because they were literally like neck and neck, like one and two with Booking, as far as how close together they were, and the last four weeks, they’ve really increased that separation. … I’m going to give a winner. The fire department that’s fighting the fires in Northern California.”

As Google ate the travel category the value of hotel-related domain names has fallen through the floor.

Most of the top selling hotel-related domain names were sold about a decade ago: 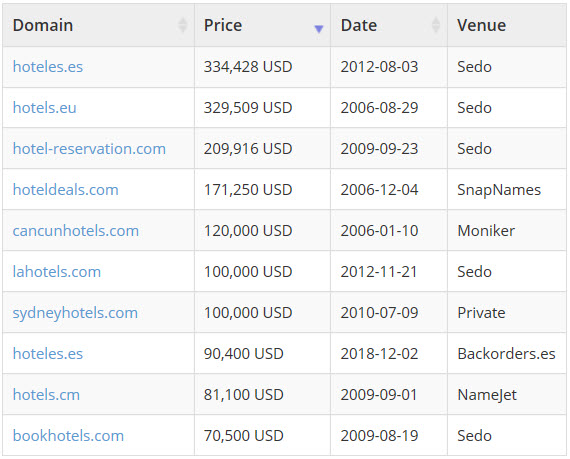 On August 8th HongKongHotels.com sold for $4,038. And the buyer may have overpaid for it!

Google consistently grows their ad revenues 20% a year in a global economy growing at under 4%.

There are only about 6 ways they can do that

Wednesday both Expedia and TripAdvisor reported earnings after hours & both fell off a cliff: “Both Okerstrom and Kaufer complained that their organic, or free, links are ending up further down the page in Google search results as Google prioritizes its own travel businesses.”

Losing 20% to 25% of your market cap in a single day is an extreme move for a company worth billions of dollars. 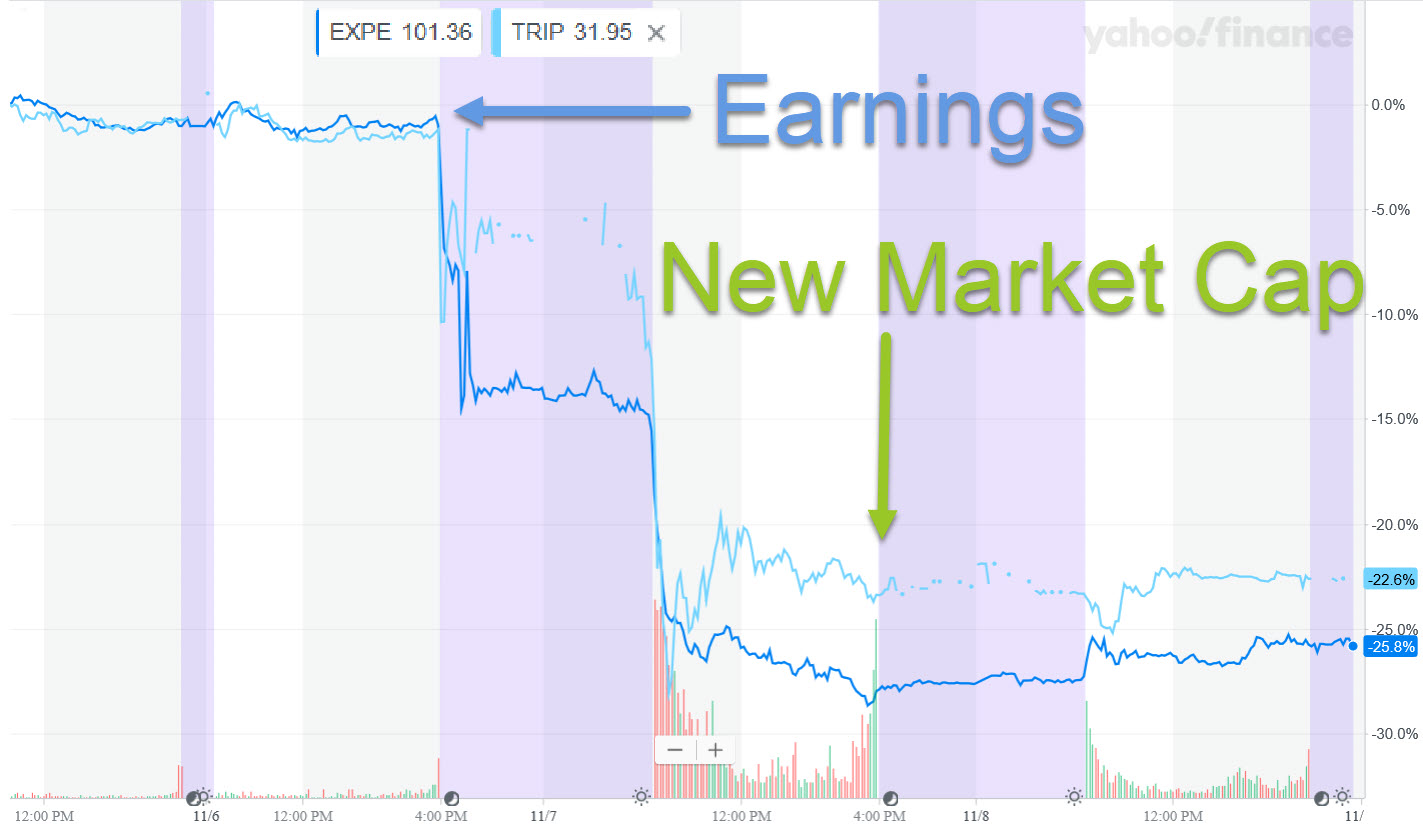 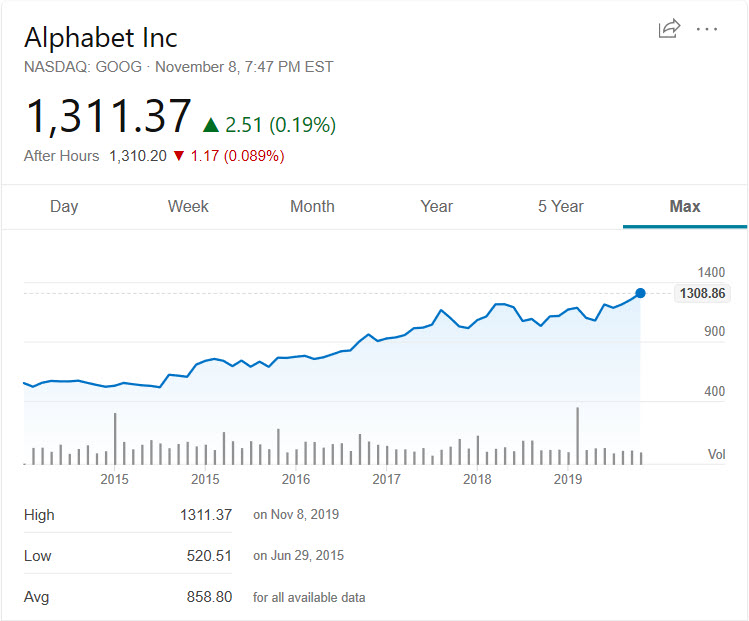 “Google’s old motto was ‘Don’t Be Evil’, but you can’t be this big and profitable and not be evil. Evil and all-time highs pretty much go hand in hand.” – Howard Lindzon

Booking held up much better than TripAdvisor & Expedia as they have a bigger footprint in Europe (where antitrust is a thing) and they have a higher reliance on paid search versus organic.

The broader SEO industry is to some degree frozen by fear. Roughly half of SEOs claim to have not bought *ANY* links in a half-decade.

Anonymous survey: have you (or your company) purchased backlinks – of ANY quality – for your own site, or any of your clients’ sites, at any point in the past ~5 years?— Lily Ray (@lilyraynyc) October 24, 2019

Long after most of the industry has stopped buying links some people still run the “paid links are a potential FTC violation guideline” line as though it is insightful and/or useful.

Some people may be violating FTC rules by purchasing links that are not labeled as sponsored. This includes “content marketers” who publish articles with paid links on sites they curate. It’s a ticking time bomb because it’s illegal.— Roger Montti (@martinibuster) October 24, 2019

Ask the people carrying Google’s water what they think of the official FTC guidance on poor ad labeling in search results and you will hear the beautiful sound of crickets chirping.

Where is the ad labeling in this unit? 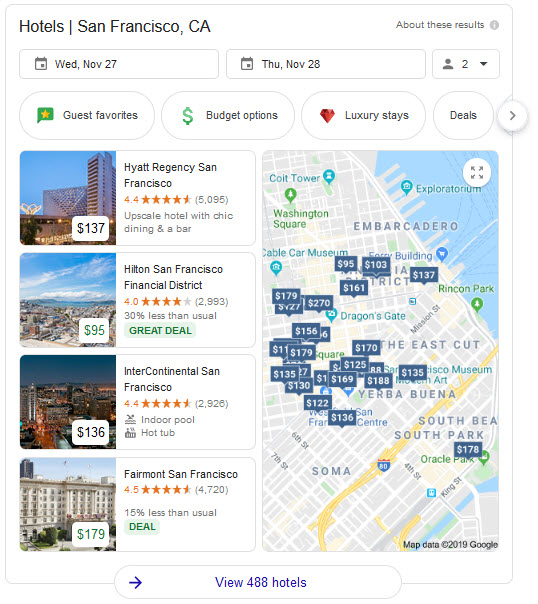 Does small gray text in the upper right corner stating “about these results” count as legitimate ad labeling?

And then when you scroll over that gray text and click on it you get “Some of these hotel search results may be personalized based on your browsing activity and recent searches on Google, as well as travel confirmations sent to your Gmail. Hotel prices come from Google’s partners.”

Zooming out a bit further on the above ad unit to look at the entire search result page, we can now see the following:

How many scrolls does one need to do to get past the above wall of ads?

If one clicks on one of the hotel prices the follow up page is … more ads.

Check out how the ad label is visually overwhelmed by a bright blue pop over. 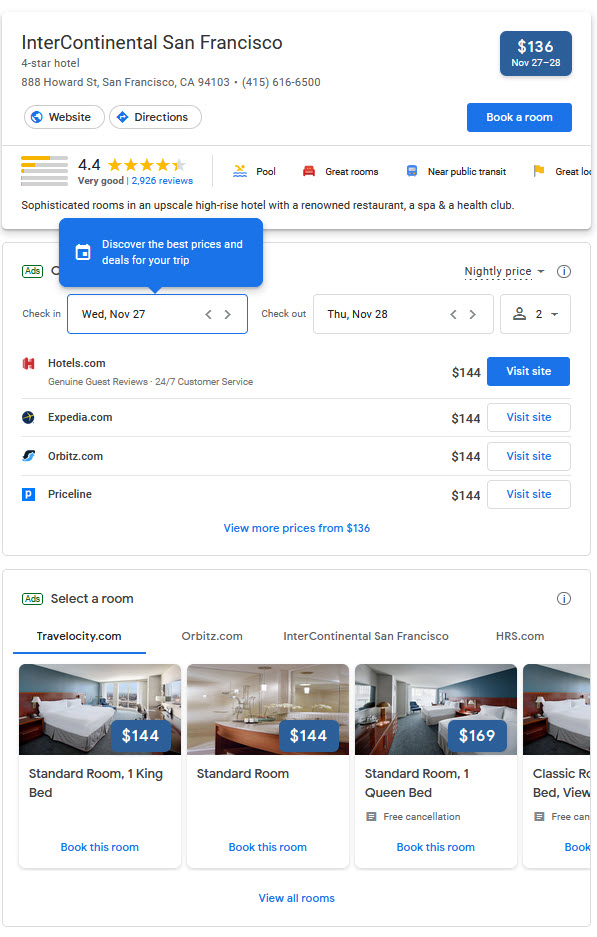 Worth noting Google Chrome has a built-in ad blocking feature which allows them to strip all ads from displaying on third party websites if they follow Google’s best practices layout used in the search results.

You won’t see ads on websites that have poor ad experiences, like:

When these ads are blocked, you’ll see an “Intrusive ads blocked” message. Intrusive ads will be removed from the page.

Hotels have been at the forefront of SEO for many years. They drive massive revenues & were perhaps the only vertical ever referenced in the Google rater guidelines which stated all affiliate sites should be labeled as spam even if they are helpful to users.

Google has won most of the profits in the travel market & so they’ll need to eat other markets to continue their 20% annual growth.

Some people who market themselves as SEO experts not only recognize this trend but even encourage this sort of behavior:

Zoopla, Rightmove and On The Market are all dominant players in the industry, and many of their house and apartment listings are duplicated across the different property portals. This represents a very real reason for Google to step in and create a more streamlined service that will help users make a more informed decision. … The launch of Google Jobs should not have come as a surprise to anyone, and neither should its potential foray into real estate. Google will want to diversify its revenue channels as much as possible, and any market that allows it to do so will be in its sights. It is no longer a matter of if they succeed, but when.

We are nearing many inflection points in many markets where markets that seemed somewhat disconnected by search will still end up being dominated by search. Google is investing heavily in quantum computing. Google Fiber was a nothingburger to force competing ISPs into accelerating expensive network upgrades, but beaming in internet services from satellites will allow Google to bypass local politics, local regulations & heavy network infrastructure construction costs. A startup named Kepler recently provided high-bandwidth connectivity to the Arctic. When Google launches a free ISP there will be many knock on effects.